Meet the Real Housewives of Toronto 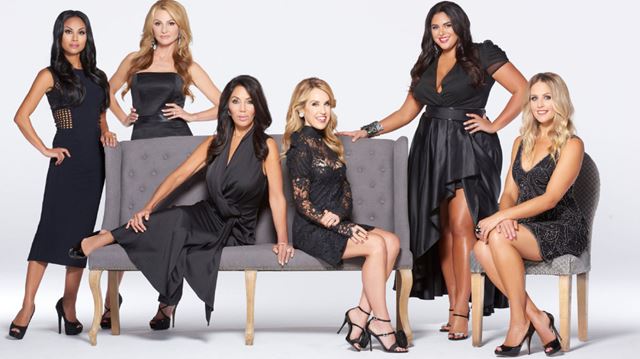 A “devout fashionista,” a “style entrepreneur,” a couple of businesswomen, a model turned humanitarian ambassador and a former actress are Toronto’s first Real Housewives.

Slice revealed the cast Thursday for the debut season of The Real Housewives of Toronto.

The reality series, part of the franchise that started in 2006 with The Real Housewives of Orange County, debuts on Slice March 7 at 10 p.m.

•Kara Alloway, “devout fashionista and mother of three”: On her fashion blog, Sparkles and Feathers and Newsprint, Alloway describes herself as “a mom, wife, traveller and shopper.” She was previously a fashion reporter for Toronto’s E-Z Rock, and fashion and beauty editor of Homemakers Magazine. She is married to lawyer Graham Alloway, president of Alloway and Associates Professional Corporation, and is marketing director for his firm. Slice says she has “born again Christian values.”

•Roxy Earle, “outspoken jet-setter and entrepreneur”: The self-described “style entrepreneur” shares “all my favourite things in life: travel, fashion, puppies, beauty and the art of living fabulously” on her website luxuriousroxy.com, where she says she aspired to “travel to exotic and glamorous places” ever since she was a little girl. She’s the second wife of tech investor Raghu, and was a marketing and advertising executive before she married.

•Gregoriane (Grego) Minot, “proud mother and life of the party”: The Montreal-raised actress and dancer is married to Pierre Jutras, who runs the Spoke Club and Spoke on the Water. She put her career on hold for her family but is a well-established French Canadian actress, according to Slice. Her IMDb resume includes the films La Run (2011) and Recon 2023 (2009).

•Ann Kaplan Mulholland, “sharp businesswoman with an even sharper wit”: Born in Winnipeg, she is the CEO of iFinance Canada, parent company to Medicard, Petcard and Dentalcard, which finance medical, dental and veterinary procedures. She also owns a luxury real estate portfolio. She made the Maclean’s list of Canada’s Top 100 Women in Business in 2015. Her second husband is cosmetic surgeon Stephen Mulholland.

•Joan Kelley Walker, “small town girl living the big city dream life”: Walker, from Wilcox, Sask., is a former model who contributes to Huffington Post Canada and has hosted Red Carpet Diary. She is also a World Vision ambassador, advocating for children in developing countries, and has received the Mother Teresa Award from Athol Murray College of Notre Dame and a Queen’s Diamond Jubilee Medal as well as World Vision’s highest award. She is married to Don Walker, CEO of Magna International.

•Jana Webb, “sizzling fitness CEO and single mother”: Webb, who grew up in Bentley, Alta., is CEO of JOGA (Yoga for Jocks), a type of yoga designed specifically for athletes. Her clients include NHL prospects, NBA players and members of the Toronto Argonauts. Slice says she’s trying to take the program international and, thus, is not focused on “looking for Mr. Right.”

The series will follow the women at home in Toronto, Muskoka and Barcelona, Spain, “dining at Toronto’s top restaurants, attending lavish soirées, travelling first class to luxurious destinations, and shopping for the very best designer clothes, shoes and jewelry,” Slice said in a news release.

But it won’t be all glamour; as a trailer for the series shows, there will be plenty of the kind of conflict that viewers expect from Housewives.

This story has been edited from an earlier version. Blue Jay Jose Bautista is not a client of Jana Webb’s.